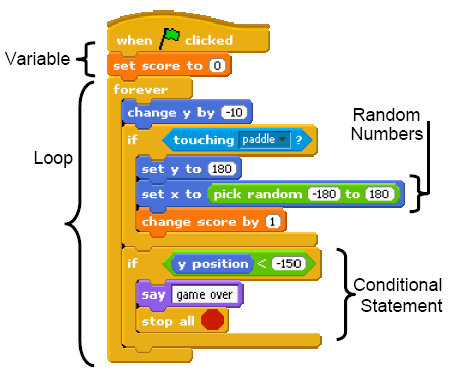 One of my part time hats includes serving as the Baden Academy Media Lab Director.  I have the extreme pleasure of working with a number of very gifted 2nd and 3rd graders and a spectacular teaching staff.

The twelve media lab students I see twice a week have just completed a four week unit on Scratch programming.  Scratch is a free download from www.scratch.mit.edu.  It is an icon based language (you drag symbolic blocks rather than type code) that allows kids to explore and create with the basic of computer programming.  By playing and creating their own story/games they learned sequence, iteration, conditional statements, Boolean logic, random numbers, and user interface design.

Programmable devices have saturated our children’s worlds.  Learning how to program is not training kids to be the ‘mechanics’ of these devices.  Rather, it is about teaching them to be drivers and not mere passengers.  I believe it is a skill that each of us working with your people needs to start playing with!

But the month wasn’t just focused on learning programming concepts.  We used the Computer Science Student Network (www.cs2n.org) sponsored Super Power contest.  CS2N sponsors a contest every three months.  You can use four different free downloads (Scratch, SAM Animation, Alice 2, and Alice 3) and follow the rubrics they post.  CS2N provided us with some training and template to create a storyboard and focus on plot, character development and story sequence.  For anyone working with 3rd graders, you’ll recognize some core standards…

What a fun way to accomplish them: to create a story/game from their own imaginations and form it into a plot!

But the month wasn’t just focused on learning programming concepts and mastering the art of writing a narrative. I could also identify the common core math concepts the students wrapped their minds around.  I watched as they made graphs and charts to work out the timing and spacing of multiple sprites throughout their narrative (“solving problems involving estimation of intervals”).

But the month wasn’t just learning programming concepts, mastering the art of writing narrative, solving mathematical intervals, it was learning to collaborate and give and receive feedback.  Only six of games started were chosen to be worked on to completion.  Every student was given an opportunity to play the other games and evaluate them per the rubrics. Many set to work researching where the codes needed to make a part of the game work or to fix a glitch. Giving and receiving feedback became part of the learning process.

Now that the students have submitted their games, they will receive games created by other students that they must evaluate.  They will use the same rubrics they referred to in order to create the games to now judge others submissions. They will score the other submissions and create constructive comments on why they gave the score they did.  Then they get evaluated as an evaluator, learning how to give useful feedback and learn from other submissions.  More core competencie (CCSS.ELA-Literacy.W.3.1 Write opinion pieces on topics or texts, supporting a point of view with reasons)!

I offer my congratulations to everyone in the lab for the six media lab entries in the “With Great Power” Computer Science competition!  Take a second to view the submissions and make a comment.  Enter the next CS2N.org contest and share with me your child’s success!

Permanent link to this article: https://growageneration.com/2013/02/18/scratch-programming-and-3rd-grade-common-core/