What is the Maker Movement?

Science Center claims Moon Landing May Have Been Faked

iDTV at the Montreal Science Centre

“Going to the Moon may have been a hoax.”

These were the opening lines in the Montréal Science Centre’s iDTV Newsroom space exploration activity.  I visited the Centre last week while in Montréal, terribly excited and open to experience another phenomenal invitation to the public to get excited about science and technology.  We bought our tickets and entered what is one of their permanent exhibits, the iDTV newsroom.  You take your place at one of the fifteen computer stations in a room that looks a bit like mission control. A virtual news editor offers five choices of subjects for you to research and report on.  I picked space exploration and my 15 year old Ian chose the cloning track.

I was dumbfounded when the virtual news reporter announced the moon landing hoax theory as something to be seriously considered.  Curious, I thought this might be a brilliant attempt to teach critical thinking, allowing the students to watch the media frenzy of bad science and conspiracy theories and compare it to scientific attempts to debunk myths.  I was waiting for something like the CNN interview with Mythbusters on their Moon Landing Hoax episode, or the National Geographic photogallery painstakingly addressing all of the conspiracy theory claims, or even a link to the extraordinarily well documented Wikipedia article.  All three are examples of popular media working hard to present researched phenomenon, and not opinion. 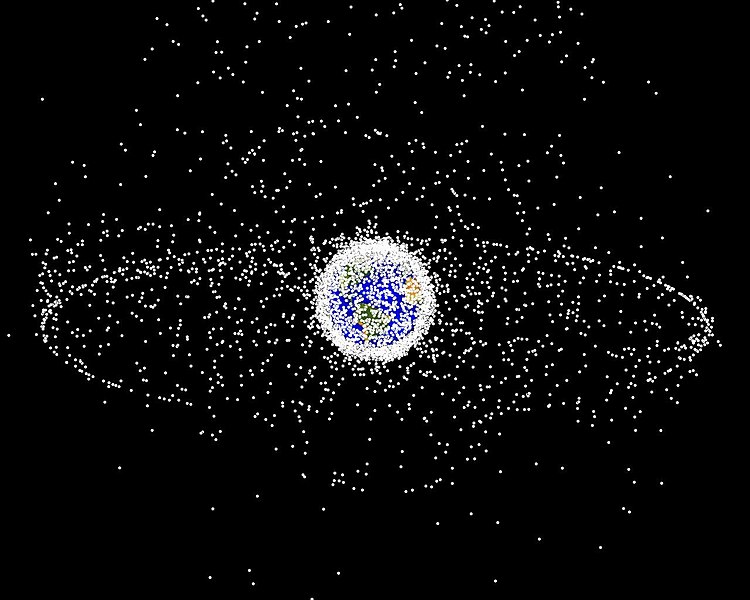 Unlike iDTV, Wikipedia uses the same image and specifies the distortion “The orbital debris dots are scaled according to the image size of the graphic to optimize their visibility and are not scaled to Earth” while responsibly highlighting the problem of space debris).

No such luck. What I went on to view were opinion pieces that belayed popular bias reported with selected and distorted facts. In one scene the reporter wears a face of contempt and disdain when she asks “Do we really want to spend money for space exploration?” In a graphic that is displayed about space junk, the thousands of pieces of junk are each individually larger than the International Space Station and hugely distorted against the graphic of the earth.  The iDTV simulation is supposed to allow students to discuss, think about, and form opinions on the topic then record and edit a “special news flash” that plays on the big screen. The goal of the experience was to learn about the work of science reporters and develop critical thinking skills. As a media lab director, I was thrilled to see hands on technology for editing and broadcasting. As a college professor, I would fail a student who based their conclusions on popular opinions and not documented and researched evidence.

Ian, who was experiencing the cloning thread, had a different experience.  He felt it introduced him to timely issues that made him think.  When he listened to my concerns about the space exploration thread, he admitted that he did not look for scientific research in his immersion and would need to re-watch before he could draw conclusions.

My experience in the iDTV newsroom was the exception.  I found the rest of the Montréal Science Centre a delight.  The hands on exploration room was filled with many of the types of activities found in other science centers.  What I found fascinating was the partnership the Centre created with area universities and the displays that highlighted scientific research happening locally.  Just some examples:

As I watch Ph.D. Comics with their two minute thesis (my 3rd grade media lab students love the one on Whale Barf), and I listen to the Melissa Marshall TED Talk of the need for engineers to communicate well to make science more accessible, I celebrate the great partnership the Montréal Science Centre has struck with local researchers, making space to display a publically consumable snapshot of the fascinating work they are doing.

I wanted to share three final comments before ending this week’s reflections.

One is the hilarious comment I overheard as we had breakfast along Lake Erie on our drive up.  A table of adults were discussing a morning news reports of the Mars One looking for one-way ticket astronauts.

First Adult: “Who would be that stupid, to sign up for a one way ticket to Mars?”

Two.  I came home to find “AstronautAbby” among my new twitter followers. She is a fascinating 16 year old STEM advocate from Minneapolis who is aspiring to be 1st astronaut to Mars.

Finally, if you want to discover why I am passionate about space, check out recent blogs and vlogs…

Build, Then Build Some More!

Space Robots and Tour of Astrobotics

Buzz and Neil go to the Moon: A Story for Pre-K

Neil Armstrong, Bill Nye and the War on Math and Physics

And keep me in mind if your Homeschool or Moms and Tots groups wants a speaker with some parent and child hands on activities.

Permanent link to this article: https://growageneration.com/2013/08/25/science-center-claims-moon-landing-may-have-been-faked/