Game Design in the Skies above Bastogne 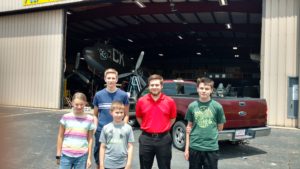 Let the game begin! Students in the G-Mites Game Design program recently converged at Cardinal Wuerl North Catholic High School to take part in a week long camp to create, design, and program a video game and create a webpage to sell game merchandise. One of the game designers, Grant Harsch, chose the theme for the video game. He wanted a game that focused on the World War II C-47 Skytrain nicknamed “The Luck of the Irish” that is being restored at the Air Heritage Museum at the Beaver County Airport. The game, aptly named “Skytrain Cargo Run,” tells the story of the Luck of the Irish’s mission into the Battle of Bastogne.  The plane and its crew dropped critically needed ammo to the fighting soldiers. As well as making the game, the students also learned the core principles of game design. Learning from the words of world renowned game designer, Dr. Jesse Schell if CMU, the students used what they learned to create and improve their game.

The game design team was small but mighty and were all determined to get their game completed in the week long camp. The lead programmer, Grant, was responsible for creating the central game play and did an amazing job crafting the cargo drop scene. He created the scripts and sprites himself and programmed “flak” that would try and distract the player as it was flying. Grant said “I learned that to have an effective game, the player needs to feel joy, love, excitement, surprise”.

Another student at the camp, Nicholas Lytle, created the opening cut scene to the game. You can hear his voice narrating sections. “I really enjoyed learning how to use scratch and seeing the pilots at Air Heritage play the game,” Nicholas said.

Along with the game design part of the camp, there was also a student that focused on learning e-commerce skills. Lauren Karg created a website skytraincargorun.weebly.com to sell merchandise with profits going to the Air Heritage Museum.  Lauren explained,  “I learned how to make a product catalog, make a website, and sell things online as well as learn a lot about World War II.”

Everyone came together during lunch as well to play fun games, with their favorite game clearly being a game called “Liar’s Dice” which taught important principles of game randomness and probability.

The topic of virtual and augmented reality was explored.  We had a generous donation of virtual reality headsets from the Pittsburgh Zoo.  Kids were amazed at the altered sense of reality that these headsets created.  They listened in rapt attention to Jesse Schell discuss the future of Virtual Reality from a recording at the Augmented World Expo. Several mentioned a desire to start a Virtual Reality G-Mites class in the fall!

The students took their finished game to the Air Heritage Museum and had some of the pilots play through the game. The students all loved seeing the pilot’s faces light up with joy as they played the game. The main purpose of this camp was to teach students the basics of game design.  Game Design is not just a skill for ‘gamers.’  It is a new way to think about design, to think about engaging another person in the story you want to tell in a participatory way, it is a way to fix a reality that is not as fun and engaging as the games we play.  All of the students had a wonderful time at the camp and have a new artefact (a digital artifact) to add to their portfolios and include in their college and scholarship applications!  Thank you to the Air Heritage Museum for their incredible support and enthusiasm of their staff into our Game Design Odyssey.

Permanent link to this article: https://growageneration.com/2017/07/24/game-design-in-the-skies-above-bastogne/