Google It – A Tour of Google Pittsburgh 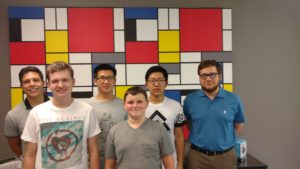 Students came together for a weeklong G-Mites Game Design class at Seton LaSalle High School Innovation Lab.  The team created a game for the Outreached Arms ministry to the homeless. The game has a player become a homeless person making big decisions in Pittsburgh.  Good decisions lead to Outreached Arms where they can find a meal, counseling to find affordable housing and a connection to a community of support.  The game, called “Changing Oliver’s Life,” features a story with choices to play through, as well as three mini games integrated within it.The game will be playable on a computer at Outreached Arms to help raise awareness of homelessness and show people what hardships a homeless person goes through in life.

Throughout the week, the students also learned core principles of game design from the words of Jesse Schell, the world renowned game designer from Carnegie Mellon University and Schell Games. The week was very challenging, but the students were up to the task of creating this game.

The group brought a diversity of talent and abilities.  Two of the students, Tianchen (Steve) Shi and Jiangrong (Bob) Jia were from China and came here to learn more about game design and hopefully find a future career. Bob worked mainly with integrating the “pac-man like” mini game that was put into the game. Bob also worked on his video making skills and putting together a video that showcased the week’s work. Steve, worked on one of the mini games as well and helped put together the final pieces of the game.

Another student, Sam Carroll, who is a student at Seton LaSalle High School worked on the backbone of the game and put together all of the choices and slides that would play for the game. This was Sam’s first time working with the Scratch programming language and he truly did a remarkable job integrating all of the pieces. CJ Inkenhaus, a 6th grader, created the Tetris game that was put into the game. He also worked hard on putting together the website to showcase the game and creating the sprites that were put into the final game. It was also his first time learning photoshop, and he was excited to use the tool for the first time.

During the week, we took a trip down to Outreached Arms to gain input on our games direction. There, we met with Sharon Boone and her son Rob, who gave us great advice on how we could improve our game. We also, ironically, met with a man named Oliver who told us his story of how he went from being homeless to being at Outreached Arms.

Though the game had one element that wasn’t quite ready at the end of the week, the students learned a lot about the game design process. They learned more about integrating emotional elements in the game and learned how to troubleshoot. Two of the student’s, Steve and Sam, were gracious enough to continue working on the game even after the week was finished to ensure the game would be 100% complete.

Permanent link to this article: https://growageneration.com/2017/08/04/creating-games-to-inspire/